My personal struggle against a chalazion: The surgical operation!

Since I couldn't find a detailed summary of a surgical operation to remove a Chalazion, I decided to talk to you about my own experience.

Here's what I will explain to readers:
• How I got my chalazion.
• How the surgery went.
• How my eye has fared since the operation. 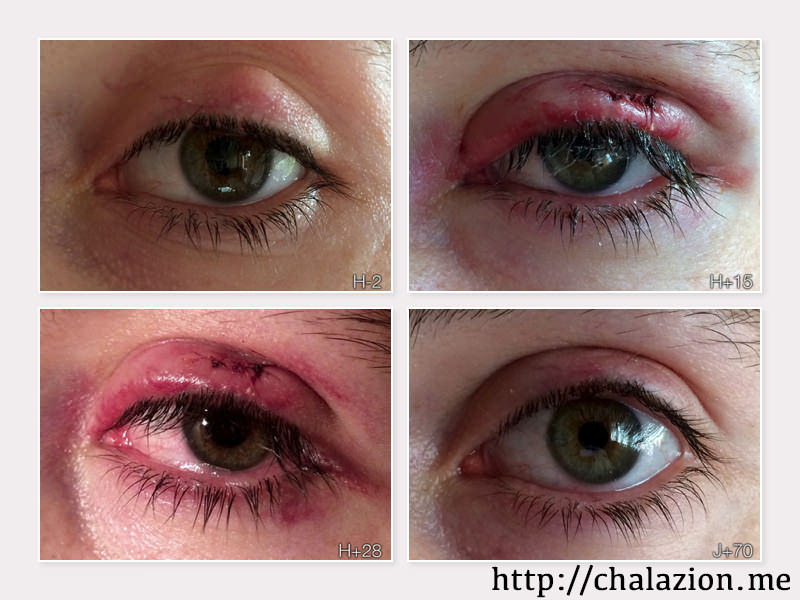 It all started when I was an adolescent. I often woke up in the morning with sleep crust on the edges of my eyelids, at the base of the lashes. It was chronic: it would last for a week, and then go away for several months. Over time, it finally went away for good.

Then, two years ago, my eyes regularly began to get red (inflammation), and get small styes that swelled up on my eyelids. They went away after a few days, but it was pretty troublesome.

I got some Sterdex and other collyrium preparations for my eyes.

My ophthalmologist said I had blepharitis. The first time it happened was when I was on a skiing trip (by the way, if anyone sees a link, don't hesitate to send me an email).

The Sterdex helped a little, but the styes kept coming back again and again.

They also recommended that I use Blephaclean (or Blephagel, or Blephasol), in order to clean my eyelids twice a day.

Recently, from out of nowhere, an enormous chalazion appeared and quickly it encysted. Even with the use of Blephaclean and Sterdex, I just couldn't get rid of it. I also tried massages with warm, damp compresses, but none of these treatments worked.

The only thing you can do with an encysted chalazion is to remove it through a small surgical operation.

So then I found an opthalmologist to remove my encysted chalazion.

H-2
2 hours before the operation
Really feeling a lot of stress, as you can imagine! But since nothing I had tried worked, I had to try an operation. The ophthalmologist I went to see is a specialist in children's care, so that was reassuring.
After studying my chalazion, the doctor suggested making an incision on the outside of the eyelid, because he determined that my chalazion was already very large and very encysted. This was perfect for me, because I didn't really want to have my eyelid turned inside out. I had already had an eyelid turned inside out once by an ophthalmologist, and it wasn't a very pleasant experience.
H+15
15 hours after the operation
The operation gets underway: Lie on the table. Drops in my eyes to anaesthetize them. It doesn't hurt, but you can sense the movement of the needles. The rest went fine. He opened up and removed the whole chalazion. It took longer than expected because it was bigger than he had thought. That led to a big problem at the end: Since a large part of my eyelid had been damaged by the cyst and the procedure lasted longer than expected, the anaesthetic started to wear off quickly, and I felt an immense pain. I was in a lot of pain for an hour. On the photo, you can see the sutures and my eye is really swollen.
H+28
28 hours after the operation
The contour of the eye begins to turn red or start to get yellow. I have cream and drops to put in twice a day. My ophthalmologist asked me to keep a compress on my eye for 48 hours to avoid getting dirt in the wound.
D+2
2 days after the operation
My eyelid doesn't hurt at all now, and that's great! So I could finally remove the compress, and that way I no longer looked like a pirate.
D+3
3 days after the operation
Today, there are more and more colors
D+4
4 days after the operation
Nothing new to report
D+5
5 days after the operation
My eyelid started to go down a little in size, so it's becoming a little less noticeable as I walk down the street.
D+9
9 days after the operation
After 9 days of cream and drops, my eyelid has almost gone back down its original size before I had the chalazion.
D+70
70 days after the operation
My eyelid has gone practically back to how it looked before the chalazion appeared. My lashes however point a little bit upward at the spot where it was the most swollen. Another issue I haven't raised till now: a nerve was cut when making the incision, and I lost sensation everywhere below the incision.

A chalazion (; plural chalazia or chalazions) or meibomian cyst is a cyst in the eyelid usually due to a blocked meibomian gland, typically in the middle of the eyelid, red, and not painful. They tend to come on gradually over a few weeks.

A chalazion may occur following a stye or from hardened oils blocking the gland. The blocked gland is usually the meibomian gland, but can also be the gland of Zeis.

A stye and cellulitis may appear similar. A stye, however, is usually more sudden in onset, painful, and occurs at the edge of the eyelid. Cellulitis is also typically painful.

Treatment is initiated with warm compresses. In addition, antibiotic/corticosteroid eyedrops or ointment may be used. If this is not effective, injecting corticosteroids into the lesion may be tried. If large, incision and drainage may be recommended. While relatively common, the frequency of the condition is unknown. It is most common in people 30–50 years of age, and equally common in males and females. The term is from the Greek khalazion (χαλάζιον) meaning "small hailstone".

Blepharitis is one of the most common ocular conditions characterized by inflammation, scaling, reddening, and crusting of the eyelid. This condition may also cause swelling, burning, itching, or a grainy sensation when introducing foreign objects or substances to the eye. Although blepharitis by itself is not sight-threatening, it can lead to permanent alterations of the eyelid margin. The primary cause is bacteria and inflammation from congested meibomian oil glands at the base of each eyelash. Other conditions may give rise to blepharitis, whether they be infectious or noninfectious, including, but not limited to, bacterial infections or allergies.

Different variations of blepharitis can be classified as seborrheic, staphylococcal, mixed, posterior or meibomitis, or parasitic. In a survey of US ophthalmologists and optometrists, 37% to 47% of patients seen by those surveyed had signs of blepharitis, which can affect all ages and ethnic groups. One single-center study of 90 patients with chronic blepharitis found that the average age of patients was 50 years old. The word is from Greek: βλέφαρον / blepharon, eyelid and -itis, inflammation of.

Often a stye will go away without any specific treatment in a few days or weeks. Recommendations to speed improvement include warm compresses. Occasionally antibiotic eye ointment may be recommended. While these measures are often recommended, there is little evidence for use in internal styes. The frequency at which styes occur is unclear, though they may occur at any age.

Meibomian glands (also called tarsal glands, palpebral glands, and tarsoconjunctival glands) are sebaceous glands along the rims of the eyelid inside the tarsal plate. They produce meibum, an oily substance that prevents evaporation of the eye's tear film. Meibum prevents tears from spilling onto the cheek, traps them between the oiled edge and the eyeball, and makes the closed lids airtight. There are about 25 such glands on the upper eyelid, and 20 on the lower eyelid.

Dysfunctional meibomian glands is believed to be the most often cause of dry eyes. They are also the cause of posterior blepharitis.